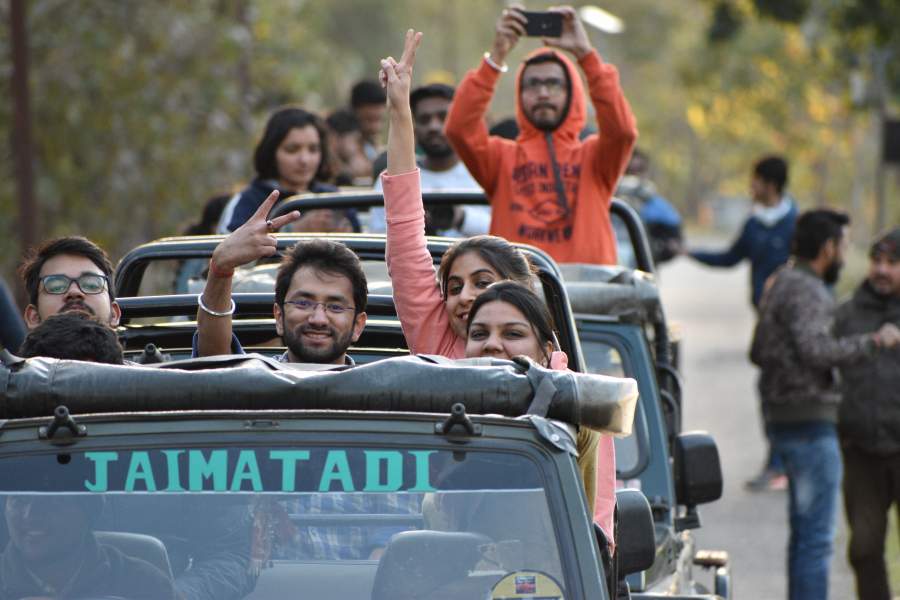 A visit to India’s famous Jim Corbett National Park on Josh Technology Group’s 2019 offsite was everything it was expected to be and then some!!!

The 3-day and 2-night trip to one of the country’s most spectacular locations kickstarted with a late night journey in 2 buses packed with almost 70 high-spirited team members. The oldest established national park and animal sanctuary in India, the pristine and lush landscape of Jim Corbett is the perfect place to unwind, relax and reconnect with nature. And that’s where the Josh Technology Group bandwagon was headed- for an extended weekend of non-stop recreation!

The journey to Jim Corbett was just as eventful as the stay as the party started the minute the buses set off. There was an ice-breaking session with the freshers on the bus(employees less than a year-old in the organisation) along with the usual bonhomie and revelry. An early morning breakfast of piping hot parathas with tea at a roadside dhaba was followed by the last leg of the journey.

It was the perfect weekend getaway and instead of the usual conferences and workshops that most offsites have, the one at JTG had just one agenda- complete and utter relaxation! While a sizeable chunk of the team dived into the swimming pool to cool off, others spent time lolling on hammocks, playing pool volleyball and badminton. The weather was absolutely spectacular and there was much to soak in. And then of course, the selfie marathon always deserves a mention with people making the most of their picturesque surroundings.

A sumptuous buffet lunch was followed by lively team building activities like rock climbing and rappelling. While most people hit the snooze button for a while after that (sleeping on the bus wasn’t really an option with all the crazy partying all around), others geared up for the next round of partying with live music and dancing. While a guitarist played live and took requests from us, others huddled around a bonfire and enjoyed the night under a gorgeous star-spangled sky.

The second day off the off-site started with an action-packed jeep safari at the crack of dawn. Albeit most people had to drag themselves out of bed after a hectic night of partying, spirits were still running high and the team left in 20 jeeps to make their way into Jim Corbett Park to spot wildlife. Enthusiasm on the safari was on a high as pictures were clicked of peacocks, spotted deer, tusked elephants and more. The stunning landscape nestled between the Himalayan foothills, over 600 bird species and animals and reptiles like the tiger, leopard, elephant, otter, gharial, ghoral and yellow throated marten make this national park one of the most sought-after tourist attractions.

After returning to the resort, team members refueled with a hearty breakfast buffet and then spent time by the pool, enjoying some leisure time and catching a few winks in time for the upcoming evening bash.

The evening saw a group going trekking while others visited the famous Garjiya Devi Temple, an hour’s drive from the resort. A sacred shrine believed to be formed by the mud and clay from a flood years ago, the temple is surrounded by the gleaming waters of the Kosi River and boasts the most idyllic scenery.

Day 2 ended with a fun-filled DJ night as the JTG family partied into the wee hours of the morning. It was more than a conventional offsite with spouses of colleagues joining the bandwagon and the directors of JTG matching the revellers step for step.

After another sumptuous breakfast buffet, the JTG family set off homebound to recover from the offsite hangover (yes! There’s indeed something called too much fun!)

We're a technology company, we get it, privacy is extremely important. The cookies we use on this site are all aimed at delivering the best experience we possibly can, nothing more. Your settings can be changed at any time, otherwise, we'll assume you're fine with our cookie use.OK